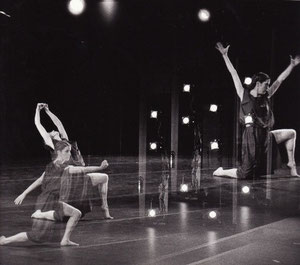 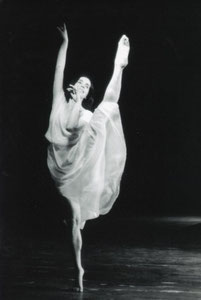 Kathleen Quinlan is originally from New York and has been living in Stockholm, Sweden, since 1987. She trained as a child dancer in ballet with Istvan Rabovisky and modern dance as a scholarship student at Dance Theatre workshop in New York City. Later she attended Boston Conservatory of Music and S.U.N.Y. Purchase as a dance major and Boston School of Fine Arts .

Kathleen danced as a soloist in Anna Sokolow´s New Players Project as well as performing as a dancer in the tradition of Isadora Duncan in the companies of Maria Theresa Duncan, Julia Levien and Hortense Kooluris. Together with pianist Richard Justin Fields , Kathleen toured in a solo program called “Hommage til Isadora”.

Ms. Quinlan worked very closely with Anna Duncan, one of Isadora´s original pupils from the Grunewald School, on the writing of her memoirs. At Anna´s death , in 1980 , Kathleen inherited the artistic responsibility and ownership of the memorbilya of Anna Duncan. This Collection is now housed at the Swedish Dance Museum in Stockholm. Together with the curator of the museum, she created a catalog and touring exhibition “In the Footsteps of Isadora: Anna Duncan.”

In Sweden, Kathleen has performed as a solo dancer together with the pianist Roland Pöntinen. In 1993, she started a children´s dance company “Lilla Baletten” who are trained and perform in the Art of Isadora as well as in Contemporary Modern Dance. Kathleen has worked as a choreographer for Ika Nord since 1991.

Kathleen Quinlan has received awards and scholarships in Dance from the Carina Ari Foundation, Rolf de Marie Foundation , the Swedish Arts Committee , from Stockholm City and the Lillian Runestam Foundation. Her work has been filmed by ARTE, the Swedish Televison as well as private filmmakers .

Ms. Quinlan travels as a guest teacher choreographing new works as well as setting the original choreography of Isadora. She has given lectures for the Nordic Research on Dance in Denmark, CORD Conference in the USA, Dance Archives in Germany and the CID World Congress on dance in Greece , to name a few. Kathleen has taught theatre dance at SEAD, Salzburg Experimental Academy of Dance in Austria.

In Stockholm, Kathleen is artistic director of Lilla Baletten and has just finished her 2nd exhibition at the Dance Museum. She is the Contemporary dance teacher at Sweden´s Royal Opera Ballet School.

“Kathleen Quinlans work with Isadoras choreography for children as well as her own modern pieces are of a classic beauty which is unique and of value. The young ones dance with obvious conviction of belief in what they are doing and the teenage girls would make Boticellis heart melt.” EXPRESSEN Margareta Sörenson Stockholm/Sweden

“Probably the most faithful record of Miss Duncans dances is in the action drawing and portraits of her time, which suggest surprisingly precise body shapes and dynamics. Those shapes were seen in Kathleen Quinlans performance. She is one of the few who successfully uses the Duncan style to develop something of her own” THE NEW YORK TIMES Jennifer Dunning N.Y.C./U.S.A.

“ Dance styles never die nor fade away. Isadora´s movement when firmly executed with strength, direction, and determinate shape, prove they still can captivate audiences, impressing us with a sense of freshness through clarity. Kathleen Quinlan reincarnates Duncan by embodying forms with her own charisma and talent, and at a level of performance she is perfectly compelling.” DANCE MAGAZINE Noel Carrol N.Y.C./U.S.A.

“Choreographer Kathleen Quinlan handles humor and tenderness with subtlety. She has a stripped bare style, and hides behind an apparent simplicity and a very rigorous research of movement and expression.” DANSE CONSERVATORIE Marie-Anne Lacour Paris/France

“The dances executed by Quinlan give the timemachine effect of the successful reconstruction. The feeling to stand in front of a past that has not for a moment tried to adapt to the taste of our times. The Dance program of Quinlan gives insight into an ideal of beauty that has almost been wiped out from the surface of the Earth. Or does it beckon from around the corner with postmodernistic sighn? The “Ave Maria” from 1918 the Madonnas of Rafael would look just like her if they one day moved.” DAGENS NYHETER Horace Engdahl Stockholm/Sweden

“ She gives the Dance a light and airy, poetic quality both in the reconstructions of the repertory of Duncan and in her own choreography in the style of Duncan. In the execution of the latest known choreography by Duncan created in 1922 to the Revolutionary Etude of Scriabin, the lyrical expression is transformed into dramatical expressiveness but not renouncing the beauty. The Dance of Quinlan is as much a loveletter from one woman to another as it is from a young dancer to a mother pioneer.” SVENSKA DAGBLADET Erik Näslund Stockholm/Sweden

Offering my music to the world!

WOMEN ARTISTS
Of course you know Rosa Bonheur, one of the most known artists of the 20th century, her painting Marché aux chevaux was sold in 1887, in New York, at the price of 268 500 F, when around the same time one would buy a painting by Renoir ou Monet for 100 F.
We have started distributing a list of
1650 WOMEN ARTISTS to answer to the frequent remark : " but there are so few women artists".
Artistes Femmes liste A-Z.pdf
Document Adobe Acrobat 1.2 MB
Télécharger